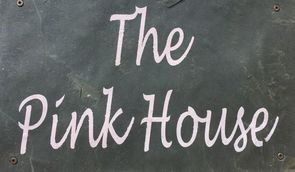 The Sanctuary for Spiritual and Creative Research is a spiritual refuge and retreat center nurturing world harmony through educational courses and creative research residencies for Ministers of the organization, students and scholars in the fields of the Intuitive Arts, the Creative Arts, Women's Spirituality and Women's Wellness. The Pink House is located in Eyeries, County Cork, Ireland. We view this location as a precious place in which to nurture and restore our bodies and spirits, and to have as our Ministry resource in perpetuity. 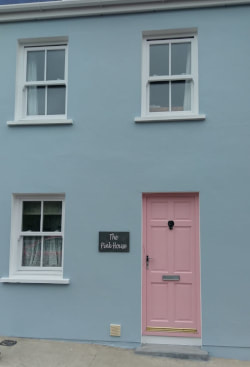 The Pink House (actually pastel blue-gray, with soft pink trim),  is a bright, airy, open two story house, with magnificent panoramic views to Coulagh Bay on the Beara Peninsula. Situated on The Ring of Beara, The Pink House is in direct relationship to sacred sites of geomatic power such as The Hag of Beara, The Ogham Stone, and the ancient Stone Circle of Ardgroom. Additionally it is in the zone of the “Wild Atlantic Coast,” a nature walking trail stretching along the Atlantic Coast from Donegal to West Cork. This trail, zoned as forever wild, protects the land and the views from The Pink House from becoming developed under Irish Law. The sitting room and the deck, as well as some upper floor rooms, are open to the view,  and the view is also present in the adjacent enchanted garden and picnic table. ​
The Pink House is a gem, centered in the intimate Village of Eyeries, within easy walking distance of markets and cafes, including a gluten free Bistro of some renown, a post office, and several local pubs which feature traditional dancing and Irish music.   It is across the street from a beautiful church, and ten minutes drive to the Buddhist Retreat, monastery, cafe and wildlife preserve: Dzogchen Beara. The house has been recently renovated and has a lovely open modern kitchen, replete with dryer, and two bathrooms one including a bathtub and the other a full shower. It is not necessary to have a car to stay at The Pink House, as all provisions are within walking, and there is a regular short bus ride to Castletownbere or the further quite cosmopolitan town of Bantry,  should further provisions or explorations be desired. As it is on the Gulf Stream, Eyeries is a relatively milder climate year round than other areas of coastal Ireland.

Additional Links about Beara Peninsula
Sacred Sites:
Dzogchen Beara, an awe-inspiring Tibetan Buddhist Retreat center on the same wild and beautiful Beara Peninsula
The Hag of Beara, The Ogham Stone, and the ancient Stone Circle of Ardgroom to name a few
Press:
March 7, 2017 article “Ireland's most beautiful landscape: Beara, West Cork”
The Ministry of Maåt provides Spiritual, Educational and Holistic support for women and the full spectrum of cultural and gender identities. MoM nurtures creativity in multiple art forms as a foundation of the organization. We consistently wish to honor Black and Brown Histories and Futures.