It's here !!!!
THE NUBIAN WORD FOR FLOWERS: POCKET EDITION

A "pocket" chamber edition of the IONE and Pauline Oliveros "Phantom" opera, featuring a deconstructed/reconstructed score and improvisational performances with electronics and moving images by the collaborative trio of IONE (text, direction, and performance), Monica Duncan (visuals, performance), and Senem Pirler (sound, performance). All combine to create a deep dream exploration of Nubian soul and colonial mind. ​​  Visit us on FaceBook
2017 MAP Fund Grantees - The Nubian Word For Flowers
We're thrilled to announce the 2017 MAP Fund Grantees! These 40 new, live performance works will receive a total of $1.2 million in direct support for project development and distribution. Read the full press release here: http://bit.ly/2qd75iF #MAP17 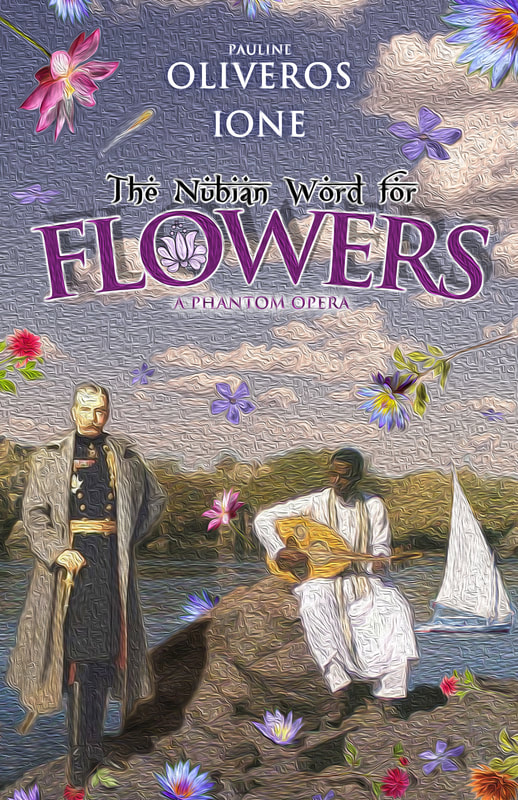 “Colonial Mind meets Nubian Soul on an island of flowers in the Nile.” 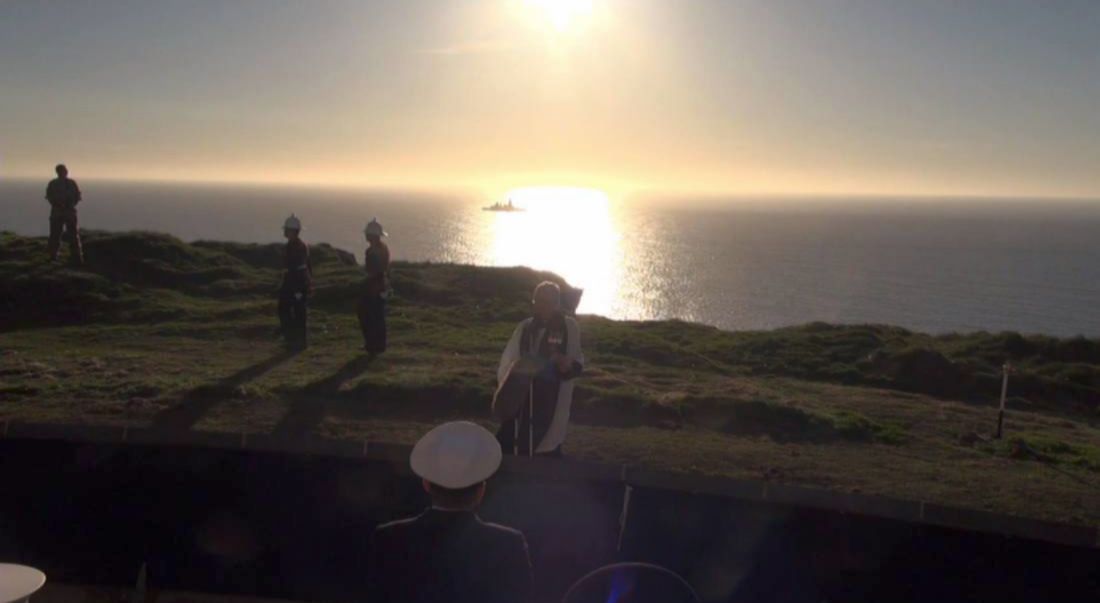 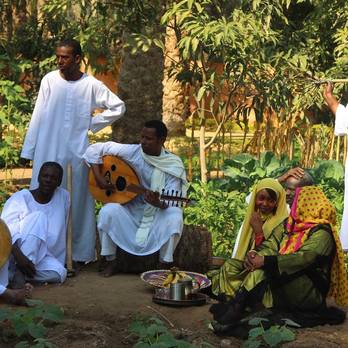 Background:
The Nubian Word for Flowers is inspired by a real life Nubian Island in Aswan, Egypt and the resilient people who have resided in countries now known as Egypt and the Sudan since antiquity. In 1964, the Aswan Dam Project caused many of the Nubian homelands to be inundated by rising floodwaters.

The opera is also inspired by real life “Lord of war” and brilliant botanist Lord Horatio Herbert Kitchener of Khartoum. Decisions made by world leaders throughout the many wars of this one man’s life, continue to haunt us today.

As a commander for Queen Victoria’s wars against encroaching Islamic fundamentalists, K of K was a key figure in the complex history of exploitation of Egyptian and Sudanese cultures by British and European colonialists. Ironically, it was Kitchener who, as a young surveyor, drew the lines delineating the Southern Levant, creating the grid system that continues to be used for mapping Israel and Palestine today 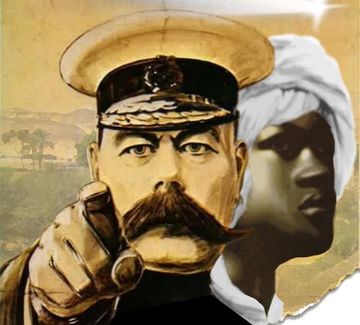 More Story:
In 1914, Kitchener is at the height of fame, and dreaming of retirement to his island when an official telegram reaches him at the train station. It is an offer he cannot refuse. His destiny is to become Secretary of War for his country. “Your Country Wants You!” exclaim the iconic war posters with Kitchener’s likeness. Millions have already perished in “The Great War” by the time Kitchener’s secret mission to Russia aboard the HMS Hampshire is violently curtailed by a German mine. Though 737 were lost, Kitchener’s body was never found.

The island that awaits K of K in The Nubian Word for Flowers is filled with lingering phantoms.  "Phantom” here is understood as a form of existence that intrudes upon a dimension that wants to consider itself “real.” Kin to the properties of a virus, the contact of phantom realities transforms the “host” reality irrevocably. 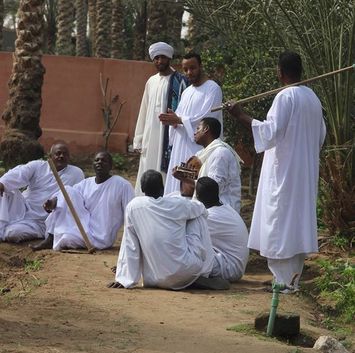 Among those emerging in the midst of disturbing floral growth and thick foliage - created through innovative projection mapping- are a prescient Nubian Boatman who communes with the timeless cosmos as well as his people’s earthly villages. Sounds and vibrant imagery unique to both ancient and modern Nubian cultures move like a great river through the opera. Languages lost to antiquity resurface to mesmerize and inform. ​
We also find a delicate fiancée who believes in destiny and a trusted Aide de Camp who never wants to leave his commander’s side. A chorus of distraught residents of the Orkney Islands who witnessed the sinking of K of K’s destroyer from the cliffs of Marwick Head try to understand what has happened to their hero and suspect a government plot. Which of his enemies has harmed him? And what is the role of the Government powers that be? Does he dream that the island sometimes fills with elephants, or that the Queen plays her golden piano for him while Churchill smokes a cigar and soaks in his tub?

Keeping apace with the unfolding memories of Kitchener’s military life, the island flowers and plants mimic human struggles for territory. For K of K memories of peak moments of bliss in the Saharan desert mingle with those of carnage in the service of the Crown. Ultimately, be they memories of ghosts or ghosts of memories, they come alive to all on the island; revealing the inhabitants’ disturbing relationships to beauty and violence. 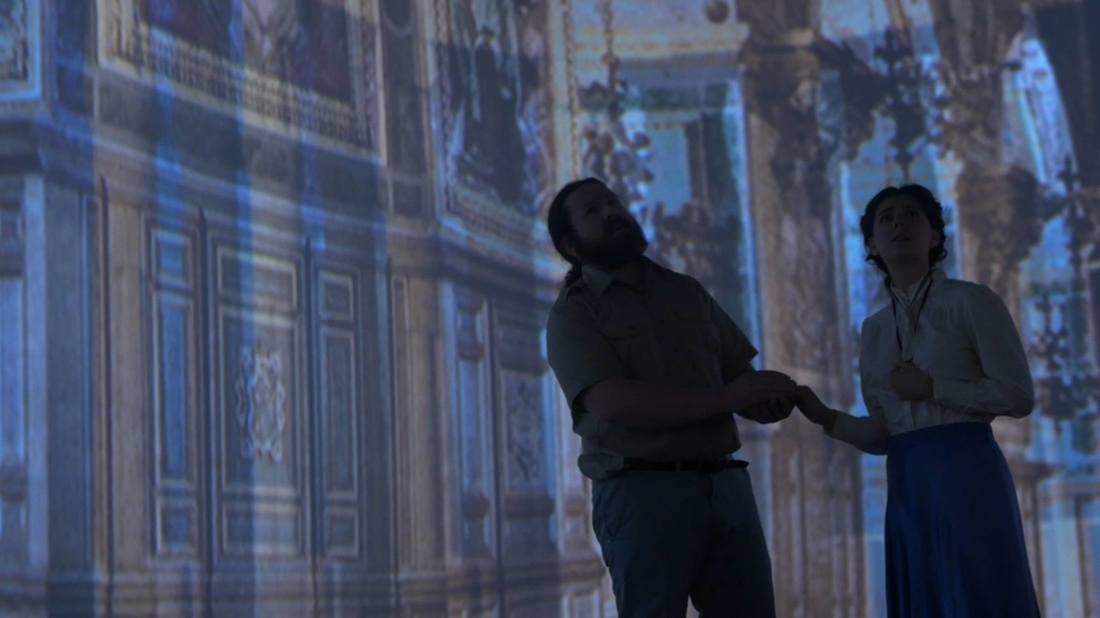 The Nubian Word For Flowers premiered at Roulette on November 30th, 2017
"Last night was magnificent!!!!! Congratulations!!! My row of feminist musicologiNYsts was in tears. A stunning performance and so immersive and sensory and complex and smart and gorgeous. So much to listen to in my memory of it now on train back to Troy. Thank you and again big congratulations." - Love, Sherrie 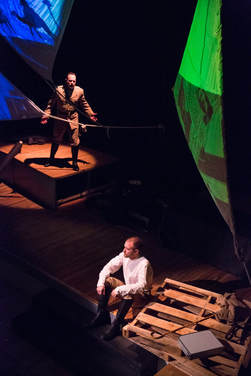 "Last night was magnificent!!!!! Congratulations!!! My row of feminist musicologiNYsts was in tears. A stunning performance and so immersive and sensory and complex and smart and gorgeous. So much to listen to in my memory of it now on train back to Troy. Thank you and again big congratulations." - Love, Sherrie
​​
"A well-deserved standing ovation for Pauline Oliveros and Carole Ione at the world premiere of their work, The Nubian Word for Flowers: A Phantom Opera in Brooklyn last night. This was a truly masterful work, and so moving. To have the ancestors rise and reassure that “we will survive this,” and to revive a colonizer to have him answer for his crimes to the librettist was just brilliant. Wow. Beautiful script by IONE, divine music by Pauline, and sound design by the amazing Senem Pirler (among many other collaborations). Filled with amor." 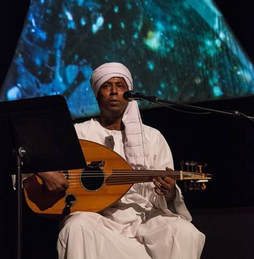 Anne Hemenway:  Do you feel this is a form of closure or an opening?
IONE:  Both. This will be bringing it to a level of closure, but there are going to be other versions in the future. We plan to do it again in 2018. There’s technology that Pauline and I were exploring which is still being developed. - Thank you, Carole Ione

"THAT WAS FANTASTIC (and everyone I spoke to thought so).  Were you happy with it?  .  So much love in the room, the air itself was imbued not just with the heady scent of Nubian flowers, but with a collective sense of welcome and good will that in our present day seems to slip further into an imaginary past which may only ever have been that....​" - Eric

An Unfinished ‘Phantom Opera’ Is Completed With Love
Pauline Oliveros died last year, leaving “The Nubian Word for Flowers.” The surreal meditation on colonialism that she created with her partner, Ione, debuts on Thursday.
By Thomas May, Nov. 24, 2017,  NY Times
An Interview with IONE
Pauline Oliveros’ last work, “The Nubian Word for Flowers: A Phantom Opera,” is coming to life thanks to the work of her partner and close collaborator of more than 30 years, Ione—an acclaimed author, playwright/director, sound/text artist, and dream specialist in her own right. The joint production between Experiments in Opera, International Contemporary Ensemble (ICE), and Ione’s own Ministry of Maåt will premiere on November 30 at Roulette in New York City. I sat down with Ione during a weekend symposium at Brooklyn College recently. We talked about the impetus for the opera, colonialism, and the challenges of presenting a posthumous work.  https://van-us.atavist.com/phantoms
Above Video by Diana Alverez
The Ministry of Maåt provides Spiritual, Educational and Holistic support for women and the full spectrum of cultural and gender identities. MoM nurtures creativity in multiple art forms as a foundation of the organization. We consistently wish to honor Black and Brown Histories and Futures.